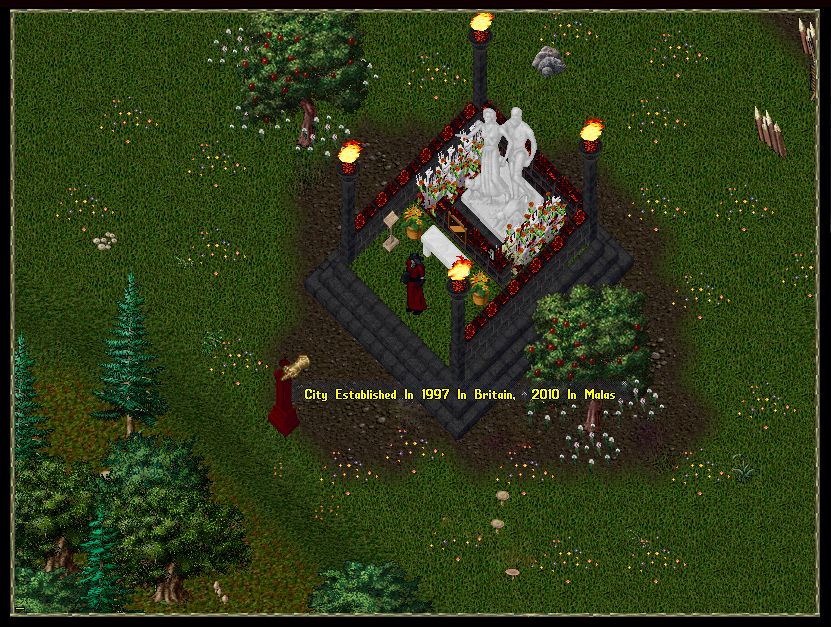 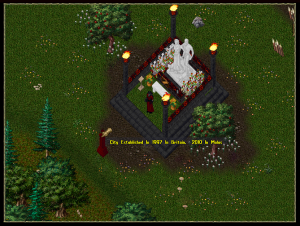 The Children of Darkness is an old school guild that was created back during beta on January 1997.  We originally started on the first day of release for Ultima Online on the Atlantic shard, then called Eastern, but it quickly got very crowded.  We ended up moving to the Catskills shard on October 17th, 1997. The Guildmasters are Pandora, yours truly, and Marius that role played as ancient vampires migrated here from Earth and travel between both worlds. Anyone that’s read any of the stories written by Anne Rice, author of the famed Vampire Chronicles which Brad Pitt and Tom Cruise pushed into fame with their movie, “Interview with the Vampire” © 1994 would recognize a lot of the names for the characters that are part of CoD.

If you would like to join our guild,  you must obviously be up to the challenge of RP’ing a vampire, a werewolf, a half-breed, a witch, or a trusted human ally with your characters.  CoD is a lawful good aligned guild that values human life and strive for wealth and power, so we’re very sophisticated and very proper and very beautiful.   Our interaction with humans is of respect and diplomacy. We, as a guild, feed only on monsters and  willing human donors.  As with all themed guilds,  you are allowed OOC play only in certain situations. In our case we are more liberal about this than other themed guilds, as we allow OOC predominantly with other players except when we are engaged in story line play.

CoD leaders often write a lot of the theme events.  All CoD members are required to attend in full character to participate when their real life allows them to.  CoD members are also encouraged to write theme events for themselves and submit them for Game Master and Seer review.

CoD uses Ventrilo voice communication server to communicate with other guild members.  We also use our guild forums to communicate offline with our members.  Members are required to register on this site and on the forums and request access to private sections of the forums so they can keep informed on events and guild meets that happen often in our guild.

—
The Lady Pandora,
Guildmistress of the Children of Darkness
Theme Administrator for The Darkness Within
pandora@childrenofdarkness.com