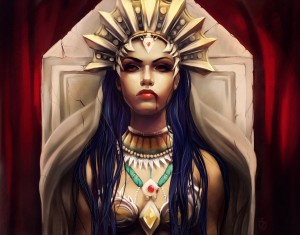 The Story of Akasha, Queen of All Vampires…
Akasha is the very first vampire created.

As told in the Anne Rice novels, Akasha was originally from Uruk, or modern-day Iraq. She rose to become a Queen in Kemet, the land that would eventually become Egypt; she and her husband King Enkil wanted their people to turn away from their cannibalistic ways and encourage the eating of grains. Rice describes Akasha as a lovely young woman who was “almost too pretty to be truly beautiful, for her prettiness overcame any sense of majesty or deep mystery.” Underneath her physical beauty, Akasha is a fundamentally dark, empty, nihilistic person with no sense of morality, ethics, or human compassion; her actions are almost always based on her insatiable need to fill her own inner emptiness.

Akasha eventually becomes fascinated by the spirits of the supernatural, forcibly bringing the red-haired witch sisters Maharet and Mekare to her court to commune with these spirits. Against their advice, Akasha forces the witch sisters to seek answers from the spirits to countless shallow questions she asks, but the ensuing answers, some in the form of obscene gestures, ultimately enrage the Queen by confirming her inner emptiness — “She had asked questions of the supernatural, a very foolish thing to do, and she had received answers which she could neither accept nor refute.” One spirit in particular, a bloodthirsty, aggressive entity called Amel, threatens Akasha and ultimately stages a weak but demonstrative attack against her. Akasha, in turn, has Mekare and Maharet publicly raped by her servant Khayman for their “witchcraft”, and banishes them from Kemet.

One year later, the twin witches are recalled to the kingdom by Khayman, where they learn that Amel had kept his presence in the kingdom and that, when the King and Queen were coincidentally assassinated by supporters of cannibalism one night, the spirit of Amel joined with Akasha’s soul as it rose from her body, re-entering her body through her wounds and fusing with her heart and brain to create an entirely new being: the vampire. Amel’s deadly lust for human blood thus passed to Akasha. Akasha then took her king Enkil and passed the “Dark Gift” onto him, transforming Enkil into a vampire, and then made Khayman, who then passed it on to Mekare and Maharet. It was Mekare who tells the Queen what kind of being she has become, as well as explaining her newfound sensitivity to sunlight and thirst for blood.

As her progeny proliferate, Akasha’s need for blood diminishes. Eventually she (along with Enkil) becomes a living statue, kept safe for centuries by guardians who know that she is the source of their existence and immortality. After one of these guardians tires of the task, he places Akasha and Enkil in the sun; vampires worldwide are burned or destroyed as a result of all being linked by the spirit of Amel that still resides in Akasha.

Akasha draws the vampire Marius to her and urges him to take her and Enkil out of Egypt. Marius does so and protects them for nearly two thousand years. At one point, Maharet stabs the statue of Akasha in the heart; as Maharet feels the energy leave her own body, it confirms the legend that to kill Akasha is to annihilate all vampires.

The Story of Enkil, King of All Vampires…
Enkil was the original ruler of the land known as Kemet.  By marriage, Akasha became his Queen.  He was very much in love with her and would yield to her every desire.  In her own quest to fulfil her empty heart, she often saw Enkil as a weak man, one she could bend to her every wish, and she was right.

In the books, it is specifically spelled out that Enkil and Akasha were made into vampires at the same time by a demonic infusion but it is later explained in that Akasha made Enkil into a vampire, after she was first made by demonic infusion, in order to save him from the wounds inflicted upon him by citizens of Kemet. At numerous points in the canonical history of Rice’s books, Enkil rises from his throne to defend Akasha from being drained of her powerful blood. Marius rescues Lestat from being destroyed by Enkil after Enkil rises and hits him away while he is drinking from Akasha, despite (or possibly because of) the fact that Akasha appears to have summoned Lestat to her. We see, then, that Enkil is not merely Akasha’s guardian and consort, but that he maintains his own will and emotions, including jealousy. 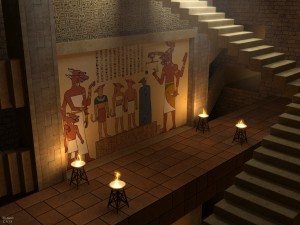 The Story of Those That Must Be Kept Within Ultima Online…
For the purposes of our role play online, Akasha and Enkil are still very much cared for by the vampire Marius, and thus his wife, Pandora.  They are kept hidden deep inside the Crypts of the Catacombs underneath the city of Vamp’s Lair. They are almost completely inanimate and are kept in locked coffins inside sarcophagi.  Only Marius and Pandora have open access to them.  Marius often goes to their lair to think or meditate.

Once a year, there is a ceremonious event where the Divine Parents are fed the blood of their chosen weak, known as the Culling. Newly made vampires must be presented to the King and Queen and they choose if that vampire is strong enough to be part of their bloodline. If not, they are devoured by the King and Queen jointly.  This ceremony must be witnessed by all the elders of the clan.  They are required by law to attend, to Pandora’s detriment.  She believes all vampires can be taught to live among the mortal world. Marius does not share in that believe.

In Vampiric gameplay, Akasha is known as “The Fount” and it is through Akasha that vampires acquire their thirst for blood, their immortality, their ability to create other vampires, and their physiological changes that without which they would cease to exist. It is believed that without Akasha, all vampires would instantly pulverize into dust and cease to exist so her life is essentially the life of all vampires. However, it is through Enkil that vampires acquire most of their Vampiric gifts such as heightened physicality, flight, fire, mind, etc. This could be because he in part is infused by his emotions and in his quest to control them learns new more supernatural abilities. Without Enkil, vampires would continue to exist but their Vampiric gifts would all vanish. Vampires would in essence be just stronger, immortal counterparts to humans. What fun would that be? Keeping them BOTH hidden is essential to our plotlines within UO.