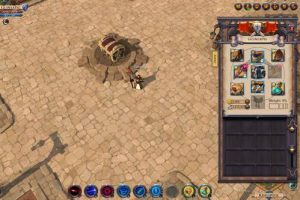 While we were quite happy with the distinct combat roles heavy, medium and light armors offered, the differentiation of Cloth, Leather and Plate on top of it was making the system too convoluted and hard to read. That is why we simplified it with this update: now, all heavy armors are Plate, all medium armors are Leather, and all light armors are Cloth.

We’re also introducing 24 new spells! Now each armor item has one unique spell only available on this specific item, which opens up lots of combinations for your very personal build. On top of this, the three different types of Leather Armor (formerly medium armor) now each have a distinct specialization within the Leather range, emphasized with different spells and stats. The same applies for cloth and plate.

Of course, you keep all your items and Destiny Board progress. All old armor pieces in the game will be replaced with their equivalent in the new system, and reforging existing items gives you access to the new spells.

The Destiny Board armor progression in the fighter line and crafter line were different under the old system – fighters progressed by weight, while crafters progressed by material. We found this confusing, and it also didn’t work well with this armor rework, so with this update the fighter line and crafter line progress through the same armor items. In the fighter line: all the old “light” items will now be Cloth, all “medium” items will now be Leather, and all “heavy” items will be Plate, so if you were a tank before with the heavy line, you’re still a tank with the new Plate line. For crafters, all the old Plate items will stay Plate, all Leather items will stay Leather and so on. This means if you were a Cloth crafter before, you can still craft all the Cloth armors (so your materials stay the same), but instead of being able to craft one DPS set, one tank set and one hybrid set, you’ll be able to craft all the DPS armors instead, as they’ll all be Cloth.

The Heretics finally get some love

All One Handed Weapons

In general one-handed weapons now have more Ability Power and damage than they previously did. The actual damage and AP increase depends on the weapon’s effective tier: At Tier 1 it is the max increase of 18.3%. That increase gets gradually reduced with each increasing tier until at max tier the increase is 0%, so exactly like the weapon used to be.

The reasoning behind this is, two-handed weapons always had 20% more AP/damage than one-handed weapons. That difference will be made up by the stats of the max tier reworked offhand. The impact and importance of the offhand increases with each effective tier, so for example a T1 offhand grants a bonus that makes up for 1.7% DMG/AP loss. Combined with the 18.3% DMG/AP buff on the T1 weapon it will compensate the extra 20% DMG/AP of two-handed weapons.

First of all Shields are now the best tanking option: they now give % based AR/MR increase. They used to give a straight AR/MR bonus, which was more beneficial for squishies than for tanks. We found this counter-intuitive, and it made the Torch the best offhand choice for tanks – the Torch was always competing with the Shield, because they both buffed effective hitpoints.

With this rework the Torch is buffing your cooldown speed, instead of hitpoints, making it the better offensive choice. The Tome is similiar to how it used to be, it’s just beenadjusted to match the new one-handed weapon progression.

The Energy Shield has been removed from the weapon lines. It is now available for the Soldier Helmets, where it fits much better than on a weapon. Now you don’t have to sacrifice one of your three weapon spell slots to bring the shield into battle.

The one-handed Arcane Staff so far was nice, but didn’t really have its unique combat role so far. That’s why we made the Arcane Orb now also purge enemy buffs, to give it its own sub role to shine in.

The Enigmatic Staff on the other hand has its role already well defined – but the invulnerability had the problem that it was not getting better at all with increasing tiers. So now, the beam applies a shield that can be outdamaged, and the strength of this shield increases at higher tiers.

Previously, when shooting Magic Arrow there was a small delay before the projectile was actually fired after the button press. This is now gone. The projectile now shoots instantly, making the spell more responsive.

Caltrops on the Crossbows was a very nice defensive ability. But for a ranged weapon, we found it would be much more fitting to place traps where you want on the battlefield, without the need to move to the desired position. That’s why we reworked the spell, so you can now shoot the trap directly into the ground. The trap is smaller and the slow is weaker, but it has only a 3s cooldown, so you can create a minefield in the enemy line. In case you also want to use the old Caltrops – the trap you place beneath your feet and almost roots enemies – well, the Bear Trap on the Hunter Hood does pretty much that, so you still have that option available if you want it.

With the 3s cast time, the Snipe Shot is very hard to get off in PvP. With all the interrupts and increased mobility in the game, the spell design felt a bit outdated. To fix this, we increased the range a lot. Getting the cast through is still difficult, but once an enemy has been targeted there is no easy running out of range now. Perfect to snipe down casters from the back row.

Heavy Crossbow users had a hard time hitting multiple targets with the Exploding Shot, due to the long delay before the bomb detonates. This delay has now been tuned down, to make it less easy for enemies to avoid the AoE damage of the bomb.

Repeating Crossbow is one of the best ranged DPS weapons. A well-timed Sweeping Bolt can pierce through multiple targets and hurt the enemy team a lot. We hope to see more of these nice shots in GvGs; however, the damage was a bit too good, stealing the show of other ranged DPS weapons, so it’s been toned down a bit.

The Dagger line has been missing an offensive spell choice on slot 2, so we gave them the new spell Deep Cuts, a spell that drastically reduces the healing recieved of its victims. Also, the speed of Dash was doubled – now it is a pretty fast repositioning tool, that isn’t easily outsprinted.

The game has changed quiet a bit, and long casts have become more and more difficult to get through in PvP. The Fire Staff line has typically had long casts with strong damage – we want to keep that identity, but there was the need to adjust the cast times a bit. So the Pyroblast has a shorter cast time and reduced damage, and the Meteor lands a bit faster after the cast.

Hammer line items can be slow to level up in PvE, so we’ve added Heavy Cleave as a good damage spell choice. This also has nice synergy in PvP, because it can be used in combos with the Hammers’ stuns. We also made some adjustments to some slot 3 spells to make them a bit more threatening, and less easily avoided.

Mace line items can be slow to level up in PvE, so we’ve added Heavy Cleave as a good damage spell choice. The Pull Area of the former Heavy Armors is now a spell option on slot 2 for all Mace line items. Charge Shield has been removed, because the Mace already has another Charge spell. A reworked version of the Charge Shield can now be found on the Knight Boots.

The Flail was one of the less useful weapons in the game, so it was time to give it a new E spell. Now it has a reworked version of the Root Prison (former Heavy Armor spell). With the Root Prison and the Pull Area available on one weapon, the Flail can now shine as a control tank weapon.

In a 1v1 scenario or solo PvE Nature Staff users were a bit too good at out-sustaining their enemies. To reduce this constant outhealing of incoming damage, reapplying Rejuvenation at max stack will now consume the stacks for a energy bonus. This change also adds a layer of new tactical decisions to this spell.

Hurricane is a great disruption spell, making this weapon a strong addition to a GvG team. However it is a little bit too good at its job, stealing too much of the spotlight from other tanking weapons. This is why the uptime of it has been reduced by 20%.

The Spirit Spear’s constant max stack uptime was just too good and didn’t offer many interesting choices. To make the stacking up not an auto-pilot playstyle, reapplying the Spirit Spear at max stack will now consume the stacks for a short movement speed boost.